The Story of John McAfee 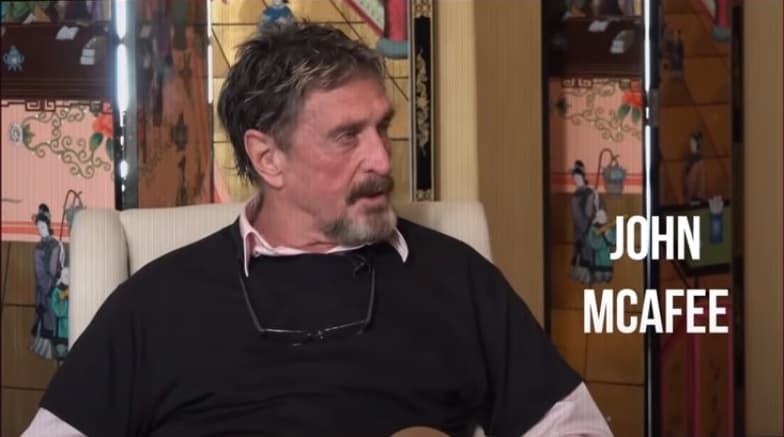 You don't have to be an IT noob to know about McAfee. McAfee is awarded antivirus software that protects users from phishing, cyberattacks, and malware. While the computer software company's popularity is evident, we should admit that the story of its founder, the eccentric IT mogul John McAfee, is no less famous.

So let's learn more about John McAfee and his role in the cryptocurrency world.

Who Is John McAfee?

John McAfee, the former antivirus software mogul, had a lifetime full of fame and controversy. After having made a fortune through his software venture, McAfee sold the company and led an eccentric life across the globe.

During his lifetime, he was accused of tax evasion, illegal dealings, and even murder. It was his involvement in Bitcoin trading, however, that led to his tragic end.

With the rise of cryptocurrency trading, more and more big fish got into the sector McAfee was no exception.

McAfee and his advisor Jimmy Watson, however, were accused of scalping and pump-and-dump schemes or buying cheap altcoins, falsely promoting them online to inflate their prices and then selling them to make a profit, which led to numerous criminal and tax evasion charges. Besides, McAfee was involved in controversy around crypto casinos, such as the iGaming site Wavesbet.

Perhaps what everyone will remember of McAfee's role in the cryptocurrency sector is his unusual bet on Bitcoin. In July 2017, John McAfee staked his sex organ on national TV if the price of BTC was not $500,000 per coin by 2020. A few months after that, in November 2017, he said that he would do so if BTC didn't reach $1 million!

Here is important to mention that crypto investing and trading is extremely risky and people should not speculate. As mentioned in the BitiCodes website: "All types of investment and trading carry risk and may lead to monetary losses. That is why you should not invest money you cannot afford to lose. Always do thorough research, calculate the risks, and plan your budget accordingly."

McAfee and the Bet

Since BTC never came anywhere near $1 million, many Twitter users started reminding McAfee that a bet is a bet. He admitted that he never believed that number, and his announcement was just a trick. Even BTC's all-time high of almost $70,000 in 2021 was way too short on where it needed to be to save McAfee's masculinity.

Conversely, if Bitcoin is worth One Million Dollars by that day, most of the world is going to feel like STicks for not listening. A Dickening will be had no matter what.

December 31, 2020 is called The Dickening after The Halvening.

What is The Halvening? 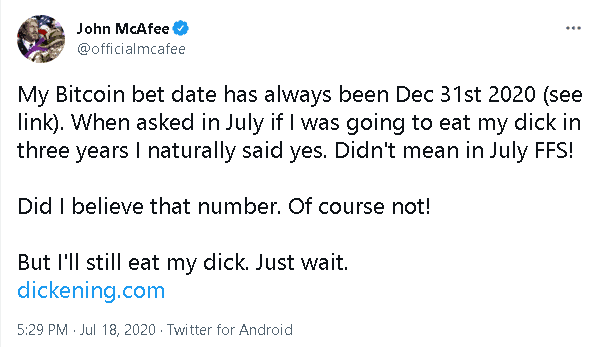 How much Bitcoin needed to grow
for McAfee not to lose?

There were two precedents of Bitcoin experiencing the surges.

This sort of upward action was not seen since 2012, but there is logarithmic precedence for the sort of insane growth that McAfee predicted.

***These fractal comparisons were created by the operator of dickening.com in October 2019 while the Bitcoin price rests at $8200. Barring a significant drop, both fractals allow for several months of side action. I am unaware of these sorts of comparisons previously being made elsewhere in relation to McAfee's prediction, which might not be so crazy and unprecedented afterall. You heard it here first. 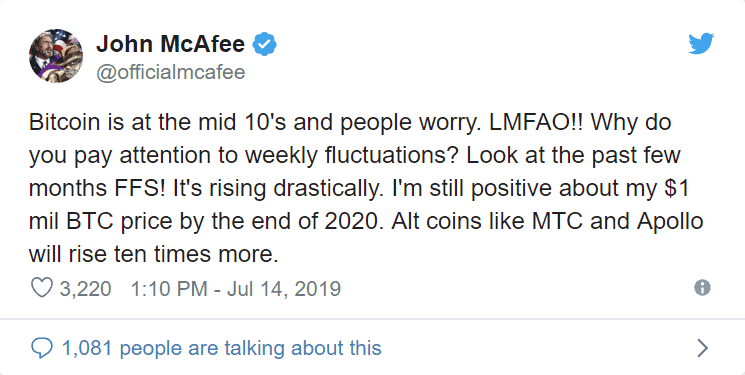 How many bets has John McAfee ever lost? 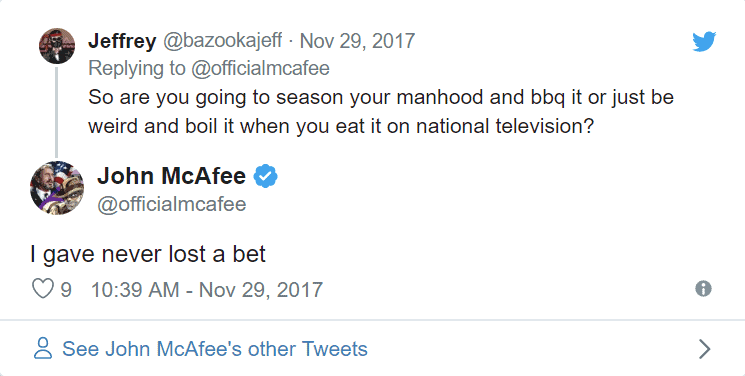 Is what McAfee bet on possible at all? 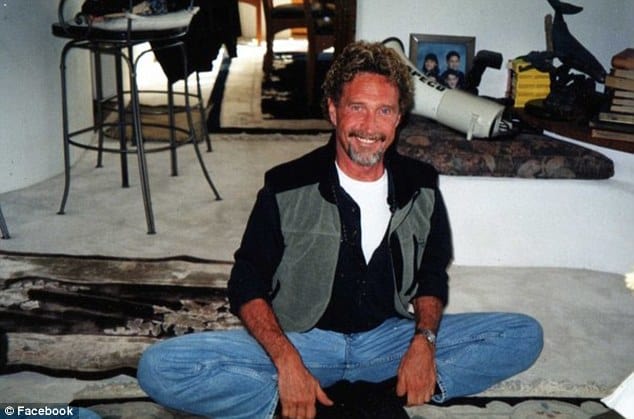 A little known fact is that John McAfee became a yoga teacher after selling his software company. Speculation is that if John McAfee loses his bet, he will not need a knife and fork. Instead, the limber McAfee seems quite capable of demonstrating to a national TV audience the yoga pose, "downward STick eater." 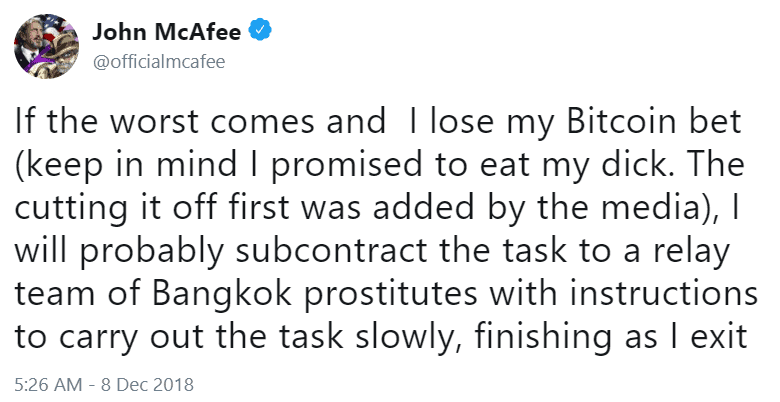 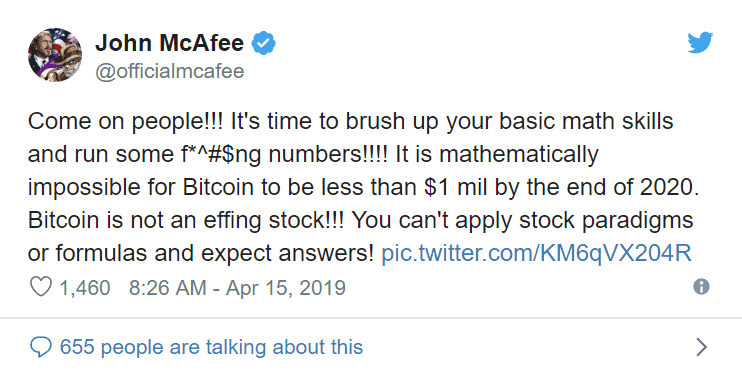 Does Anyone Else Believe This? 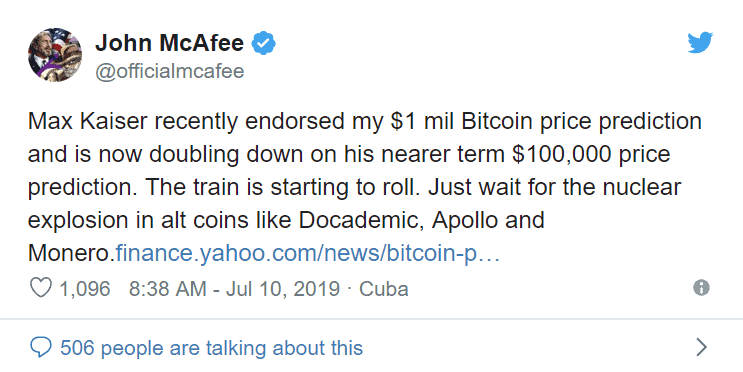 In this interview with Patrick Bet-David, John McAfee explains how he arrived at a $1,000,000 pricetag for bitcoin.

The End of McAfee

Undoubtedly, IT mogul and risk-taker John McAfee left a mark in the crypto industry. It all ended in 2021 when McAfee was found dead by hanging in his prison cell in Spain – while waiting to be sent to the US to face tax evasion charges.

While crypto enthusiasts will have to stop waiting for such a wager to be shown on TV, McAfee's story reminds us that the crypto space remains speculative and volatile.